Background: Oral health is an invaluable tool in the attainment of good general health.  A chief complaint during history taking can play a role in treatment planning. Clinical, research and administrative objectives of dental practices rely on the presence of an easily identifiable and clear chief complaint.
Objective: To determine the chief complaint of dental patients presenting at a secondary healthcare facility in Southern-Nigeria.
Materials and Method:  A 5-year retrospective study was conducted at the dental department, Central Hospital, Oleh, Delta State. Variables of interest which included age, gender, occupation, religion, chief complaint, chief diagnosis and return visit were collected from the case records. The obtained data were subjected to descriptive statistics in the form of frequencies, cross-tabulations, and percentages using IBM® SPSS® Statistics version 25 software.
Results: A total of 857 cases (477 (55.7%) females and 380 (44.3%) males) containing the variables of interest were retrieved from the hospital records. The age of the patients was from 0 – 103 years with a mean age of 39.00 years. Toothache and apical periodontitis were the most common chief complaint (61.6%) and diagnosis (31.2%) among patients. Other chief complaints were broken/cracked teeth and shaking teeth. 31.2% of the patient with the complaint of toothache was diagnosed with apical periodontitis.
Conclusion: Data from this study revealed that patients of a healthcare facility in Southern Nigeria had toothache as their main chief presenting complaint and apical periodontitis as their main chief diagnosis.

Oral health is an invaluable tool in the attainment of good general health. Oral healthcare is becoming more tasking, due to the diagnosis and planning of treatment being dependent on the chief complaint reported by the patient.1 A chief complaint during history taking can play a role in treatment planning. Clinical, research and administrative objectives of dental practices rely on the presence of an easily identifiable and clear chief complaint.

A chief complaint is defined as a subjective statement, provided by a patient or responsible informant that describes the most significant or serious symptoms or signs of illness or dysfunction that caused him or her to seek a healthcare provider, and is generally recorded in the patient’s own words.1 Obtaining the chief complaint does not only encourage communication between the doctor and patient but also forms the framework around which a clinician builds a diagnosis.2 Multiple complaints are recorded in a chronological order to reflect the patient’s perception of the problem accurately. The severity of the chief complaint reflects the urgency of the patient to seek dental care.1

Presenting complaint of the patients is one of the most common indicators of health behaviour which will ultimately impact on oral health.3 It is the role of the dental health personnel to promote the oral health-seeking behaviour of the public, particularly through the utilisation of health services.

This study was carried out due to the dearth of research data on the chief complaints of dental patients presenting at secondary healthcare facilities in Southern-Nigeria, particularly Delta State, and therefore, aims to determine the chief complaint of dental patients presenting at a secondary healthcare facility in Southern-Nigeria.

This was a retrospective study of patients that presented at the Dental department, Central Hospital, Oleh, Delta state over five years (January 2015 – December 2019). Case records for all the patients within the study period were identified, and the variables of interest extracted from the records included age, gender, occupation, religion chief complaint, chief diagnosis and return visit. Cases with incomplete information were excluded from the study. Ethical clearance was sought and obtained from the ethical committee of the Delta State Hospitals Management Board.

Statistical analysis was carried out using the IBM® SPSS® Statistics version 25 software. For analysis, the age of the patients was categorised into childhood (0 – 17 years), adulthood (18 – 64 years) and elderly (≥ 65 years), to help highlight the clinical implications of the study. The significance tests, were the Pearson’s Chi-square and Fisher’s exact, α was set at 0.05.

Table 1: Age and sex distribution among the patients 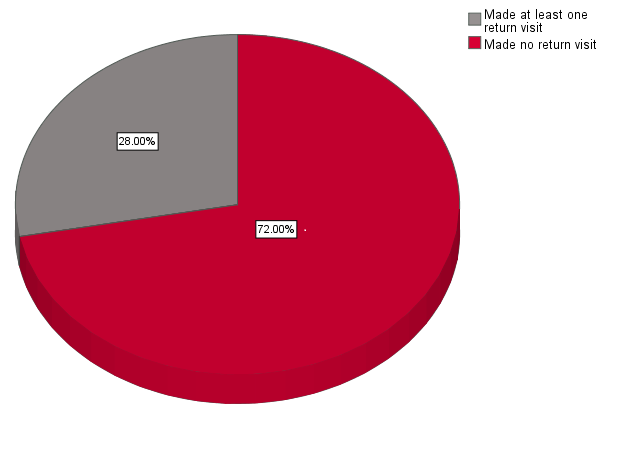 * 1: Toothache; 2: Broken/Cracked teeth; 3: Shaking teeth; 4: I have extra teeth; 5: My gums have ulcer/My teeth fell off/I injured my lips with my teeth; 6: Discomfort in tongue/I injured my Lip/teeth; 7: Swollen Jaw/Face/Gums; 8: I want to remove teeth/Bleeding gums; 9: I have wrongly positioned teeth; 10: I had a road traffic accident; 11: Bad breath; 12: I have hole in my teeth; 13: I want to clean my teeth; 14: My teeth is scattered/I don’t like the appearance of my teeth/Unable to open/close mouth; 15: Broken dentures/I came for check-up; 16:I have gum pain/Bleeding from nostrils while brushing/Noticed pus in my palate; 17: Unequal face/Facial pain/I have a growth in my mouth; 18: Milk teeth refused to fall off/Discomfort in-between teeth/I want to fill teeth; 19: Missing teeth; 20: Gum overgrowth/Too much saliva inside mouth/Swelling under lower jaw/My gum has hole; 21: I have throat pain/I injured my tongue; 23: Facial/Jaw injury/Discoloured teeth; 24: Jaw pain

There was a higher distribution of adults in the present study, this was in agreement with previous studies.4-5 In this study, more females than males sought dental healthcare services, a finding that correlates with some previous studies1,5-8 on oral health-seeking behaviour. However, these findings are in contrast to those from Northern Nigeria, where males rather than females dominate the dental attendance and receipt of dental treatment.9-10 There existed an array of chief complaints and diagnoses among the studied patients which may be related to the diversity in their ages, sexes, and occupations. The most acceptable explanation for the predominant oral diseases (apical periodontitis, fractured teeth, gingivitis, dentoalveolar abscess, periodontitis and pulpitis) diagnosed may be due to ignorance, low oral health awareness and knowledge,11 negative oral health attitude, cariogenic dietary pattern, dietary habits, inappropriate/adventurous lifestyle and suboptimal oral health practices. The observation of toothache as the chief complaint of patients who thought it is necessary to visit the dentist at Central Hospital, Oleh corresponds with reports from other studies that cited pain as the most common reason for patients seeking dental healthcare services.4-5,11,12 The complaint of toothache was from apical periodontitis, fractured teeth, dentoalveolar abscess, pulpitis, periodontitis, gingivitis, pericoronitis and retained roots. Toothache and apical periodontitis were higher in adults and among females. Broken/cracked teeth was the second most common complaint and was commoner among adults and males, which may be attributed to the use of motorcycles by adults in the studied community and the adventurous lifestyle of males. Apical periodontitis was the most common diagnosis, it was commoner among adults which may be due to ignorance, poor oral awareness and poverty. It was also more common among females8,13, which may be attributed to their preference for sweet diets. Fractured teeth were commoner among adults, a justified finding that can be ascribed to the prevailing use of motorcycles across sexes without adequate safety measures in the studied community. The frequency of dentoalveolar abscess among the studied population is a call for urgency as it poses a great threat of progression into more complicating infections (e.g. Ludwig’s angina and Fascial space infection) that are associated with increased risk of mortality. Other significant complaints such as I want to clean my teeth and I had a road traffic accident were commoner in adults and females, which may be due to better aesthetic considerations among females, commuting without safety practices in place. bad breath was commoner in males and was predominantly due to gingivitis which was in agreement with a previous study.6

The low percentage of patients who presented on account of dental check-up and of patients that made a subsequent return visit after the index visit reflects the poor preventive dental attendance pattern among Nigerians. This is in agreement with previous studies carried out in Nigeria.14-15 Symptomatic and irregular dental visits have been reported to be more common than preventive dental visits among Nigerians.6 This may be due to ignorance, poor oral health awareness, and poverty. The findings of this study may have been limited by its retrospective nature and the number of cases excluded because of incomplete information of interest.

Data from this study revealed that patients of a healthcare facility in Southern Nigeria had toothache as their main chief presenting complaint and apical periodontitis as their main chief diagnosis. There is a need to mobilise a community health approach in preventing the major oral diseases seen in this study.

There are no conflicts of interest.