Background: Gestational choriocarcinoma co-existing with or following a term pregnancy is rare, highly metastatic and accounts for about one in one hundred and sixty thousand pregnancies. We report a rare case of gestational choriocarcinoma following term pregnancy, to highlight its presentation, diagnosis and management.
Case presentation: She was a 32-year-old Para-1 lady; rushed to accident and emergency unit of our hospital with complaints of recurrent severe vaginal bleeding, haemoptysis, and generalised body weakness three months following delivery of a healthy term baby. On examination at presentation, she was chronically ill looking, febrile, pale, anicteric, acyanosed, and moderately dehydrated with no pedal oedema. Pelvic ultrasonographic features were suggestive of gestational trophoblastic disease. Her Chest X-ray revealed metastasis to the lungs, and pre-treatment serum beta human chorionic gonadotrophin (β-hCG) level was 139,755 m IU/ml. Results of other investigations done were within normal range. She subsequently had suction evacuation, excision of vaginal and paraurethral lesions; received seven courses of combined chemotherapy (EMA /CO regimen) and serum β-hCG level reduced < 5 mIU/mL with complete remission of all metastatic deposits.
Conclusion: Gestational choriocarcinoma in high risk patient is curable with multiagent chemotherapy irrespective of its rapid metastatic nature and complications.

choriocarcinoma can co-exist with normal pregnancy, and occur after a term pregnancy, spontaneous or induced abortions as well as ectopic pregnancies.  Although choriocarcinoma is highly metastatic and often wide spread at the time of diagnosis, it is curable in over 98 % of cases.1

Choriocarcinoma coexisting or following a term pregnancy is rare and estimated to occur in 1 in 160,000 pregnancies.7 We report a rare case of gestational choriocarcinoma with metastasis to the lung and vagina, diagnosed histologically three months after vaginal delivery of healthy term baby.

A 32-year-old Para 1 (alive) lady who presented to the Accident & Emergency Department of our hospital with complaints of recurrent severe vaginal bleeding/spotting, vomiting with associated generalized body weakness and dizziness, all of 3months duration prior to presentation.

Vaginal bleeding started three months following the delivery of a healthy term female baby three months prior to presentation. It was gradual in onset, dark red with blood clots with intervals of spotting. She used five sanitary pads per day to contain bleeding as against two pads during her normal menses. There was associated history of haemoptysis, dizziness, but no fainting spells. She had no history of trauma to the abdomen or genitalia. There was also no history of bleeding from puncture sites and other body orifices.

Vomiting started about the same period, the vomitus consisted of yellowish/brownish substances and recently ingested feeds, worse in the morning and associated with haemoptysis. She had about four episodes per day. There was associated generalized weakness of the body that prevented her normal daily activities.

At onset of symptoms, she presented to a private clinic where an ultrasound scan done showed evidence of gestational trophoblastic disease, for which she received intravenous fluid, antibiotics, had evacuation done and three doses of intramuscular methotrexate administered. With persistence of symptoms and elevated β-hCG result of 139,755 m IU/ml she was referred to our hospital for expert management.

At presentation, she was acutely ill looking, pale, febrile (axillary temperature of 37.7 ℃), acyanosed, mildly dehydrated with no pedal oedema. Her respiratory rate was 24 cycles per minute and chest was clinically clear. Cardiovascular system examination revealed a pulse rate of 80 beats/minute and blood pressure 100/70 mm Hg. Her Abdomen was full, soft, moved with respiration with no area of tenderness. Liver and spleen were not palpably enlarged, and both kidneys were not ballotable. Uterine size was consistent with a 12-week pregnancy size. Vaginal examination revealed vulva smeared with blood, para-urethral nodule and vaginal deposits with blood clots. Cervix was soft and cervical os admitted a tip of finger. Pouch of Douglas was not full and there was no cervical excitation tenderness. The gloved examining fingers were stained with altered blood.

She was transfused with four units of sedimented red cells because her parked cell volume on admission was 19%. The International Federation of Obstetrics and Gynaecology (FIGO)/world Health Organisation (WHO) prognostic scoring system was used to classify her risk group or category, to aid the choice of chemotherapeutic option for treatment. Using this scoring system, she was classified into a high-risk group with the total score of 9 (pre-medication β hCG – 4, antecedent pregnancy -2, number of metastasis -1, and previous chemotherapy-2) and stage III disease. 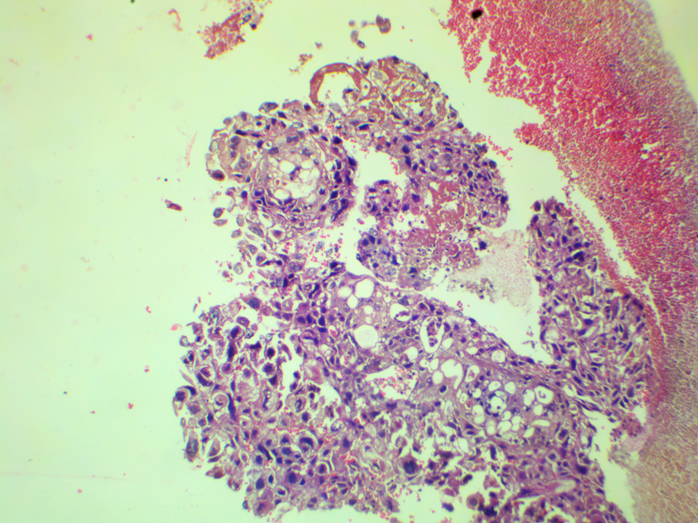 Multi-agent   chemotherapy: Etoposide, Methotrexate, Actinomycin D, Cyclophosphamide and Vincristine (Oncovin) (EMA /CO) regimen was used. She had seven courses of multi-agent chemotherapy; for each course she was given etoposide 100 mg/m2 in 200 ml of infusion over 30 minutes, methotrexate 300 mg /m2 (100 mg/m2 IV push, then 200 mg/m2 in infusion over 12 hours), actinomycin D 0.5 mg on day 1 of first week. Etoposide 100 mg/m2 in 200 ml of infusion over 30 minutes; actinomycin D 0.5 mg and folinic acid 15 mg P.O 12 hourly x 4 doses starting 24 hours after commencement of methotrexate on day 2 of first week. On day 8 i.e. week 2, intravenous cyclophosphamide 600 mg/m2 and intravenous vincristine 1.4 mg/m2 were administered.  Her case evolution was favourable as evidenced by normalized human chorionic gonadotropin and complete remission of the metastatic lesions.

Although choriocarcinoma is often commonly preceded by molar gestation, it also develops after a normal term pregnancy, ectopic pregnancy, abortion and still birth.1,5,9 Index case of gestational choriocarcinoma occurred after a healthy term pregnancy. While gestational choriocarcinoma is a highly metastatic tumour, it is chemo-sensitive with a cure rate of more than 98%. Our patient had favourable case evolution as evidenced by undetectable level of β-hCG and complete remission of the vaginal and paraurethral deposits within 8 weeks. She received multi-agent chemotherapy: Etoposide, Actinomycin D, Methotrexate, Vincristine and cyclophosphamide (EMA/CO) regimen. Following introduction of multi-agent chemotherapy in the 1970s, recent studies have reported cure rates of 85 to 94%.10,11 Although, prior to introduction of multi-agent chemotherapy, less than one-third of the high-risk group would be cured with the use of single agent chemotherapy.8

The clinical features of choriocarcinoma may be due to localization of the disease in the uterus which results in erratic bleeding in about two-third of cases, and/or from the distant metastases that can present with different range of symptoms.2 However, one third of the patients will have no diagnosed residual abnormality in the uterus thereby making the diagnosis of choriocarcinoma more challenging.12 Thus, in such cases good gynaecological examination and elevated serum β-hCG and high index of suspicion make the diagnosis clear. Common sites of metastases are the lungs, central nervous system, and liver. Metastases to pituitary, gastrointestinal system, brain, lacrimal gland and other sites have also been reported.13,14,15 These buttress the fact that Gestational choriocarcinoma is widely metastatic and can affect any part of the body. Patients may also present with generalised body weakness, weight loss vomiting, haemoptysis especially with lung metastases as it was in our patient.

Histopathological examination of placenta is often helpful in making the diagnosis of gestational choriocarcinoma following a term pregnancy. However rare cases have been reported to have been diagnosed without routine histologic examination of placenta.16 Following a term pregnancy, especially in cases without routine placental examination in particular, postpartum, clinical and laboratory examination (elevated serum level of β-hCG) should raise a high index of suspicion of the disease. In such cases, histologic examination of the products evacuated and/or metastatic deposits will aid in establishing the diagnosis of gestational choriocarcinoma. In our case, the diagnosis was made with high index of suspicion, and confirmed with the histology examination of the evacuated samples from the uterus, vagina as well as the para-urethral deposits despite unavailability of any report on the placenta in the antecedent pregnancy.

Although, choriocarcinoma is highly malignant, it has a high cure rate especially with early diagnosis and prompt initiation of chemotherapy. The FIGO prognostic scoring system is helpful in categorising patient into low- and high-risk group for initiation of single agent and multi-agent chemotherapy.17 Using the FIGO scoring system, the patient had a total score of 9 and she was classified into high risk group for which multi-agent chemotherapy was used for treatment. She had metastasis to the lungs, and was classified as stage III disease. The chemotherapeutic agents used were intravenous  etoposide 100 mg/m2, methotrexate 300 mg/m2, actinomycin D 0.5 mg in day 1 of first week; etoposide, actinomycin D and folinic acid 15 mg (commenced 24 hours following methotrexate administration) on day 2 of first week;  cyclophosphamide 600 mg/m2 and vincristine (oncovin) 1.5 mg/m2  in second week, that is , on day 8. Our patient had five courses of chemotherapy and with complete resolution of symptoms; and two more courses following undetectable level of β-hCG to take care of any residual disease. Figure 2, shows the different serum beta human chorionic gonadotrophic levels in her courses of treatment. The β-hCG level dropped from 139,755 mIU/L to 11,536 post evacuation (91.7% decline). Following administration of fourth and sixth courses of multi-agent chemotherapy the level of serum β-hCG was 9.1m IU/mL and less than 5 mIU/L respectively. The value remained insignificant after six weeks treatment following normalization of serum β-hCG. 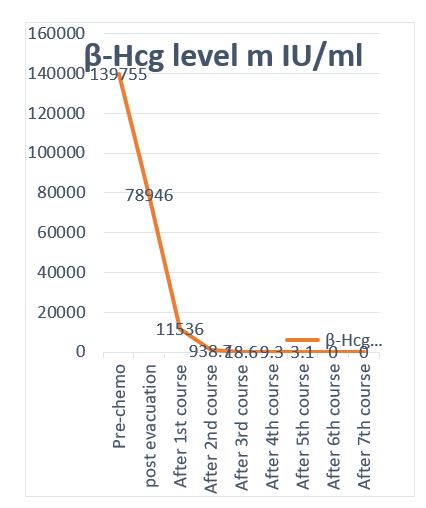 Unlike the single agent chemotherapy with methotrexate, multi-agent chemotherapy (EMA/CO) is associated with myelosuppression necessitating the use of granulocyte colony stimulating factors support weekly to maintain treatment efficacy and neutropenic sepsis. Our patient developed neutropenia following the second course of chemotherapy for which granulocyte colony stimulating factor (neupogen) was introduced and her white blood cell count improved remarkably. There was also associated nausea and vomiting for which she was managed with ondansetron and domperidone.  We did not record any life-threatening toxicity in our patient apart from the above complications. Recent study with over 30,000 patients showed that EMA/CO regimen, if kept under 6 months in duration carries no overall increased risk of triggering a second cancer in later life.18

Relapse also occurs in cases of choriocarcinoma. Once serum β-hCG level falls to normal level, the risk of relapse is <4% and 8% for patients starting on low-risk group and high-risk group (EMA/CO) respectively.19 Though, single agent regimen with methotrexate can hasten menopause by three years, multiagent regimen with EMA/CO appears to have no impact on the chances of a successful pregnancy which is 83% for both groups20. It is appropriate to defer pregnancy for 12 months after treatment to avoid any teratogenic effect on the developing oocytes.  This also minimizes possible diagnostic confusion from the rising serum β-hCG levels due to a new pregnancy or disease relapse. As such our patient was counselled on the need to prevent pregnancy for at least 12 months and she opted for long acting hormonal contraceptive method.

Gestational choriocarcinoma is highly metastatic but chemo-sensitive with high cure rate. Women of reproductive age presenting with clinical features suggestive of choriocarcinoma following a mole, abortion or pre/term pregnancy should be investigated and managed appropriately. A high index of suspicion will enhance prompt diagnosis, and commencement of treatment as well as follow-up which would improve clinical outcome.

Acknowledgement: We sincerely thank the patient for her consent to report this case.