Background: Obstetric Brachial Plexus Injury (OBPI) is the most common nerve injury in children associated with significant upper extremity impairment. Foetal risk factors include breech presentation at birth and shoulder dystocia, while others include assisted delivery and poor intrapartum practices among many others. The infant with OBPI typically presents at delivery with decreased active movement of the affected upper limb and asymmetrical primitive reflex responses.
Case presentation: This case is that of a day-old male baby who was referred to physiotherapy on account of inability to move the right arm since birth. Physiotherapy was tailored towards caregiver education on patient handling, strengthening of the weak muscles, improvement of physiological properties of the muscles, prevention of secondary musculoskeletal adaptation, functional habilitation of the baby as his condition improves. At the end of consistent 3 months of physiotherapy sessions, the outcome of the intervention revealed a significant improvement in the child’s condition with total correction of the waiter’s tip deformity and active movement of the affected upper limb although with a little residual weakness.
Conclusion: The recovery from OBPI depends on the severity of the injury and early physiotherapy intervention brings about a better prognosis.

Obstetric Brachial Plexus Injury (OBPI) is the most common nerve injury in children associated with significant upper extremity impairment.1 Fetal risk factors include breech presentation at birth and shoulder dystocia, while others include assisted delivery and poor intrapartum practices among many others.2,3 The infant typically presents at delivery with decreased active movement of the affected upper limb and asymmetrical primitive reflex responses.4 OBPI may occur in infants born by caesarean section although the incidence is significantly smaller when compared to children born by vaginal delivery.1 OBPI is also called Neonatal Brachial Plexus Palsy or Obstetric Brachial Plexus Palsy.

The prevalence of children with OBPI in Nigeria over a 10-year study period showed a persistent high prevalence, averaging 15.3% per year.5 Hamzat et al, reported prevalence of OBPI in Accra, Ghana to be 27.2%. Another study also found that only 55.2% of OBPI cases were referred for physiotherapy within one month after diagnosis, the treatment disposition for majority (88.1%) of the children were not documented and only 4.8% was formally discharged from physiotherapy.6

The most common fetal risk factor in Obstetric Brachial Plexus Injury is shoulder dystocia and this is difficulty in delivery of the shoulder during child birth.3 Macrosomia is generally accepted as when birth weight of the baby is 4kg to 4.5kg or more regardless of gestational age.7 Macrosomia is a risk factor for shoulder dystocia. Delivery of a fetus with macrosomia is often accompanied by labor difficulties mostly in the second stage of labor. This may include difficulty in delivering the shoulder and excessive traction and manoeuvres could be used to help in the delivery which could injure the brachial plexus.2,3

The rehabilitation of children with OBPI is primarily carried out by physiotherapists. This case report presents an effective and evidence-based practice in the physiotherapy management of OBPI.

This is a case of a day-old child with a primary complaint of inability to move the right arm since immediately after birth. During the initial assessment, the mother reported that the pregnancy was carried to term and delivery was said to be by a vaginal cephalic delivery. Labour lasted for about 10 hours and there was no instrumental delivery. There was history of shoulder dystocia as mother stated that the baby’s shoulders were trapped-in for some minutes during the delivery. Baby was said to have cried immediately after delivery and his birth weight was reported to be 3.9 kg. Child’s inability to move the right arm was noticed. Patient was subsequently referred to physiotherapy.

On examination, the primitive reflexes were intact and no abnormality was noted at the unaffected left upper limb. However, at his right upper limb, there was a typical waiter’s tip deformity, mild swelling at the shoulder region, hypertonicity and reduced biceps muscle tendon. The impression of an extended Erb’s palsy of the right upper limb was made.

The aims of physiotherapy were listed as caregiver education on patient handling, to strengthen weak muscles, to improve physiological properties of the muscles, to prevent secondary musculoskeletal adaptation and to functionally habilitate the baby as his condition improves.

Treatment commenced at the second week in order to allow the inflammatory process to resolve. Treatment regimen during weeks 2 to 4 were majorly caregiver education on patient handling, electrical stimulation to the shoulder flexors and abductors; elbow flexors; radio-ulnar supinator and wrist extensors (with parameters set at a frequency between 15-25Hz; width between 280-300 micro second; and duration of 10-15 minutes), play therapy and tactile stimulation. Toronto score and Active Movement Scale (AMS) for the right upper limb movements were assessed to be 0/7 (No contraction/full motion) and 0/7 (No muscle tone or contraction/full joint range) respectively after two weeks.

During the 9th to 12th week, treatments from the previous week were maintained with the addition of Constraint Induced Movement Therapy (CIMT) to the unaffected limb and the caregiver was taught how to apply it at home as part of the home programmes. AMS for shoulder flexors and abductors were assessed to be 6/7 and 5/7 respectively.

At the end of consistent 3 months of physiotherapy, a significant improvement was recorded with total correction of the waiter’s tip deformity and active movement of the affected upper limb although with a little residual weakness. The impression made was that there was no indication for referral/surgical intervention.

The appointment was rescheduled to monthly intervals with continuation of conservative management. 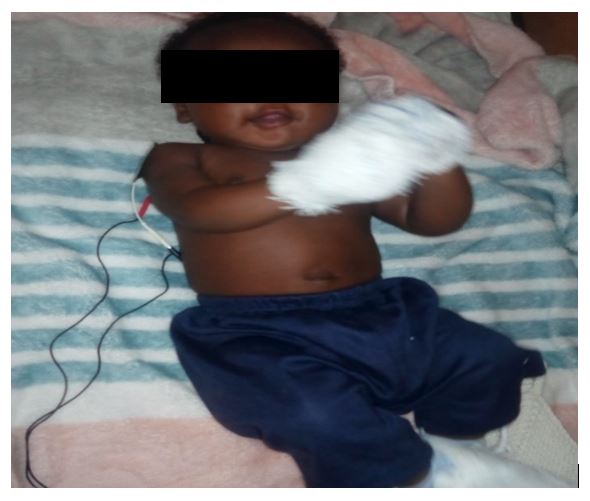 Figure 1: Image showing the baby undergoing electrical stimulation (improvised) to the flexor group of right shoulder muscles, with crepe bandage in place for auto-assisted exercise of the right upper limb.

Treatment regimen including passive movement, free active exercise, auto-assisted exercise, tactile stimulation with different textures and neuro-developmental therapy were the interventions adopted at a regular interval following injury and as the patient’s condition improved. These are often prescribed as conservative management for OBPI.8,9 Also, electrical and functional electrical stimulation as described in the case presented had been proven to be beneficial in a similar case earlier reported.10 These interventions were aimed at improving range of motion, preventing contractures, increasing the child’s awareness of the affected arm and improving muscle strength.11 The use of music as play therapy to gain the attention of the child during therapy session was of great importance and certainly assisted the delivery of the right techniques with zero to minimal restriction. This play therapy technique was adopted from earlier study.12 A systematic review suggested that physiotherapy interventions like CIMT, kinesiotape, electrotherapy and the use of splints or orthotics have positive outcome in OBPI.13 Evidence have also shown that home programmes given to the caregivers, to carry out specific exercises with their child 2-3 times a day in the comfort of their own home, in addition to education on patient handling has a huge benefit on patient’s recovery.14,15

Recovery from OBPI depends on the severity, the mechanism and the level of affectation. Early physiotherapy intervention brings about a better prognosis in OBPI. In Nigeria, OBPI still has a high prevalence despite improved medical care. There should be established continual interdisciplinary working relationship and standardized protocols or guidelines for the management of children with OBPI.

Consent was sought and obtained from the caregiver of the child reported here.