Background: Serum beta human chorionic gonadotropin (β hCG) is one of the placental peptides that have been associated with the severity of preeclampsia.
Objective: To evaluate the accuracy of quantitative serum beta hCG as prognostic indicator of pregnancy outcome among preeclamptic patients at the Federal Medical Centre, Yenagoa.
Materials and Methods: This is a hospital-based prospective case-control study where one hundred patients with preeclampsia (who satisfied the inclusion criteria) were recruited consecutively as they were admitted into the antenatal or labour ward. One hundred non-preeclamptic patients were also recruited as control. Foeto-maternal data were recorded into a protocol. Adverse perinatal outcomes such as IUGR, IUFD and Birth Asphyxia were also recorded into the protocol. Levels of maternal quantitative serum beta human chorionic gonadotropin as well as complications of the disease such as Eclampsia, HELLP syndrome and acute renal failure were also recorded into the protocol.
Data entry and statistical analysis was done using statistical package for social science (SPSS for windows version 22.0 SPSS Inc; Chicago, USA). Student t-test was used to determine association between quantitative variables. Level of significance was set at P < 0.05.
Results: The mean age in the study group was 28 ± 6.7 years while in the control group it was 31 ± 6.5 years. The difference in age was not statistically significant (p = 0.53). The mean serum quantitative serum β hCG were significantly higher amongst participants with preeclampsia than in those without preeclampsia (405.6 ± 995µmol/L vs 232.7 ± 26.3 µmol/L, p = 0.00) and (26776.6 ± 19590.5 miu/ml vs 7973.6 ± 4193.7 miu/ml, p < 0.00) respectively. β hCG was statistically associated with the occurrence of Eclampsia (p = 0.01), Severe Hypertension (p = 0.01), IUGR (P = 0.01) and Birth Asphyxia (P = 0.05). The prognostic accuracy of serum β hCG in predicting pregnancy outcomes were: HELLP syndrome (0.25, 0.33, 0.44) Eclampsia (0.13, 0.39, 0.50), Acute Renal Failure (0.33), IUGR (0.39), IUFD (0.27) and Birth Asphyxia (0.38).
Conclusion: The mean quantitative serum β hCG was higher amongst participants with preeclampsia than in those without preeclampsia. Serum β hCG level was found to be a useful prognostic indicator for foeto-maternal outcome in women with preeclampsia. While its use is relevant in our locality, further studies of other serum markers is recommended.

Preeclampsia is a pregnancy specific disease characterized by hypertension and proteinuria arising de novo after the 20th week of gestation in a previously normotensive and non proteinuric woman.3 The prevalence of preeclampsia varies significantly worldwide due to its wide variation in epidemiological studies. Estimates of prevalence of preeclampsia by World Health Organisation shows that it is seven times higher in developing countries than in developed countries.4

Serum beta human chorionic gonadotropin (β hCG) is one of the placental peptides that have been associated with the severity of preeclampsia. This is alluded to the fact that preeclampsia is characterized by disturbed trophoblastic physiology hence early placental dysfunction could be reflected by altered hCG concentration.5   The relationship between increasing β hCG levels and severity of preeclampsia was first noted by Smith et al in 1936.6  Since then numerous studies have suggested that elevated maternal serum β hCG level may be associated with severe preeclampsia.

Preeclampsia is a common problem worldwide and Federal Medical Centre, Yenagoa is no exception. Maternal serum beta human chorionic gonadotropin has been reported to be useful in the prognostication of the disease and may reflect the severity of the condition.7,8

The ability to detect the mild form of preeclampsia would allow closer surveillance and early intervention to improve outcome.9 The resultant effect of this study on the subject matter will give room for a well-coordinated planning and interventions that may at least bring about the expected reduction in perinatal and maternal morbidity and mortality in our locality.1

Inclusion criteria included all preeclamptic admitted into the antenatal ward and labour ward of Federal Medical Centre, Yenagoa, who consented to be part of the study within the study period.

The sample size for the study was calculated using the formula:

Prevalence of preeclampsia that was used in this study based on a previous study done in Bayelsa state was 5.6%1

Therefore, 100 patients who met the inclusion criteria were recruited for this study.

In our centre, about 400 patients register for antenatal care per month and about 5%-10% when followed up to the third trimester are estimated to develop preeclampsia. This study was carried out within 5 months.

Patients were recruited consecutively as they were admitted into the antenatal ward and labour ward with preeclampsia. Thorough history and examination were used in selecting patients based on the inclusion and exclusion criteria. The blood pressure was measured with the use of manual sphygmomanometer while the patient was in supine position on a couch with a left side tilt. An appropriate size cuff that covers at least 2/3rd of the upper arm was used. The systolic blood pressure was taken at the first point the sound was heard while the diastolic blood pressure was taken as Korotkoff V.

A patient was said to be hypertensive when her blood pressure was persistently equal to or greater than 140/90 mmHg measured at least 6 hours apart. Urine collection was done in the antenatal ward and labour ward.  Patients were trained and instructed adequately on how to collect clean catch midstream urine. This involved initial cleaning of the vulva with copious amount of clean water. The labia were parted and the first part of the urine was voided and the next stream of urine (about 5 millilitres) was collected into a clean, dry urine bottle with patient’s name and number written on it. Trained nurses were recruited to supervise the process. The urine specimen was taken to the laboratory for protein estimation using dipstick.

Permission was obtained from the Head of Department, Chemical Pathology of the Federal Medical Centre, Yenagoa, one staff was trained on the objective and protocol of the study. Protein estimation was based on the colour changes of the dipstick compared to the corresponding colour chart on the reagent container. The diagnosis of proteinuria was made when two midstream samples of urine collected at least four hours apart showed one or more plus of albumin using dipstick and in suspicious cases, urine microscopy, culture and sensitivity was done to exclude urinary tract infection. For the diagnosis and classification of preeclampsia, Davey and McGillivray’s classification adopted by the International Society for the Study of Hypertension in pregnancy (ISSH) was used.

The laboratory work was done in the Department of Chemical Pathology of the Federal Medical Centre, Yenagoa. Permission was obtained from the Head of department. Three staff were trained on the objective and protocol of the study. All patients who met the inclusion criteria were properly counselled and consent obtained from them. Five millilitres of blood were collected from their cubital vein using a sterile needle and a syringe into a plane specimen bottle. Serum was separated by centrifugation for ten minutes at 3,500rpm. The supernatant was transferred by Pasteur pipette into a test tube for immediate analysis or stored at 2-8 ℃ until time of analysis usually within 24 hours.

Socio-demographic data and clinical characteristics such as age, tribe, marital and booking status was obtained and recorded in the protocol. In addition, the gestational age at delivery, birth weight, 5-minute Apgar scores and admission to special care baby unit was noted. Adverse perinatal outcomes like Intrauterine growth restriction (IUGR), Birth Asphyxia and Intrauterine foetal death (IUFD) were also noted.  Mothers admitted into intensive care unit were followed up and their outcomes recorded. Maternal adverse outcomes such as Eclampsia, Acute renal failure and HELLP syndrome were also noted. The blood samples were sent to the laboratory for analysis.

Data entry and statistical analysis was done using statistical package for social science (SPSS for windows version 22.0. SPSS Inc; Chicago, USA). Percentages, means and standard deviations were calculated. Chi-square was used to determine association between qualitative variables. Student t-test was used to determine association between quantitative variables. Level of significance was set at P < 0.05. Tables were used to illustrate patterns of variables. Sensitivity, specificity, predictive values and accuracy were calculated for the serum markers in relation to foetal and maternal outcomes of women who had preeclampsia.

Primipaternity was a known risk factor for preeclampsia and the difference between groups was statistically significant (p = 0.00) as 69% (69/100) the cases were pregnant for their partners for the first time as against 45% (45/100) for the control group.

Table 2 shows statistical significance of the β-hCG level (p = 0.001) of the study group (pre-eclamptic compared to the control group. 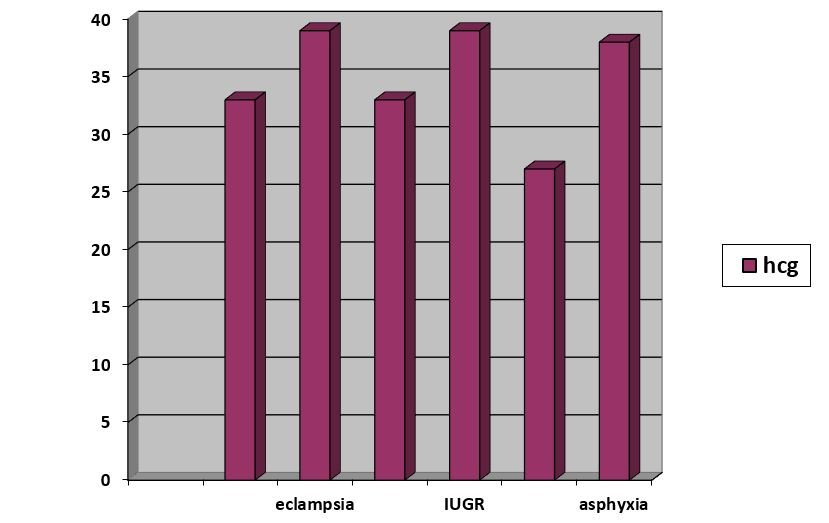 Figure 1: Bar chart showing the accuracy of serum B hCG in predicting adverse pregnancy outcome. The accuracy is highest for eclampsia, IUGR and Asphyxia.

In this study, the mean age of cases and controls were 28 ± 6.7 and 31± 6.5 respectively. The mean age of cases is higher than 27± 4.9 and 27.2± 5.6 years reported in Calabar by Kooffrey et al11 in 2014 and Ogun Sotunsa et al12 in 2016 respectively. The results from this study are consistent with the usual risk factors for preeclampsia including primipaternity and family history of preeclampsia.13, 14 Primipaternity was more common in the study group (70%) than in the control group (45%) with the difference being statistically significant (p = 0.00). This is in keeping with theories surrounding the origins of preeclampsia identifying pregnancy by a new spouse or partner as a risk factor for the condition.13, 14

More women in the study group (35%) as compared to the control group (7%) had a family history of hypertensive disease in pregnancy. Genetic factors have been implicated in the development of preeclampsia. Daughters of women with preeclampsia are about four times more likely to develop the disease than daughter in-laws and it has been established that it is familial.13, 15

The association between serum β hCG levels and eclampsia (p =0.00) as well as HELLP (p = 0.04) were found to be statistically significant. However, the association with acute renal failure did not achieve statistical significance (p = 0.05). Serum β hCG levels had a statistically significant association with IUGR (p =0.00) and birth asphyxia (p = 0.00). There was no association between serum β HCG and IUFD (p = 0.05). Estimation of serum β hCG has been used as a marker to determine normal and abnormal pregnancy outcomes and has been found to be associated with severe pre-eclampsia.8,16,18 The severity of preeclampsia may be determined by clinical features or abnormal laboratory parameters.14 The adverse pregnancy outcomes in this study are considered as features of severe preeclampsia.

The mean quantitative serum β hCG was higher amongst participants with preeclampsia than in those without preeclampsia. Serum β hCG level was found to be a useful prognostic indicator for foetomaternal outcome in women with preeclampsia. While its use is relevant in our locality, further studies of other serum markers is recommended.

This was a hospital-based study. The results may not reflect the findings in other tertiary institutions in Nigeria or the West African sub-region.

The authors appreciate the patients that participated in this research, and the consultants/residents at the departments of obstetrics & gynaecology and chemical pathology for the roles they played in making this research possible.

The research was funded by the authors.

The authors declare that there are no conflicts of interest.

Author 1 designed the study, performed the statistical analysis, wrote the protocol, managed literature searches and wrote the first draft of the manuscript. Authors 2, 3 and 4 reviewed and managed the analyses of the study. Author 5 carried out the laboratory investigations. Authors 6 and 7 participated in literature searches. All authors read and approved the final manuscript.

Written informed consent was obtained from every patient that participated in the research.

The research work was examined and approved by the hospital research and ethics committee.