Small bowel cavernous haemangioma in a 3-year-old boy: A case report and review of the literature

Background: Haemangioma of the small bowel present rarely and pose a diagnostic challenge preoperatively. Clinical presentation may include progressive abdominal distension, occult or massive gastrointestinal bleeding, obstruction, perforation and intussusception.
Case presentation: We report a 3-year-old boy that presented through the children emergency unit with a 3-month history of progressive abdominal distension and exploration revealed haemangioma of the small bowel.
Conclusion: Small bowel haemangioma cause life threating symptoms and should be considered in cases of paediatric anaemia unresponsive to medical treatment.

A 3-year-old boy presented with 3 months history of generalised weakness of the body and intra-abdominal mass which progressively increased in size. He had progressive weight loss and anorexia. There was no history of vomiting, constipation nor change in bowel habit, no history of haematochezia nor melena.

There was no history of swelling, patch or nevus in any other part of the body. He was initially managed in a peripheral hospital where he was transfused with several units of blood on account of anaemia without remission and was later referred to our centre. Perinatal history was unremarkable and no delay in achieving milestone.

Physical examination revealed the boy was cachectic, pale, afebrile, anicteric, not dehydrated and had no palpable peripheral lymphadenopathy. Abdomen was grossly distended, moved with respiration, with scarification marks on both flanks, not tender on palpation, and there was a centrally located firm and mobile intrabdominal mass. A diagnosis of intrabdominal malignancy was made.

Investigation done revealed haemoglobin level of 10g/dl (for which blood was cross matched), essentially normal serum electrolytes and abdominal computerised tomography scan finding of a huge, well defined, lobulated, isodense mass measuring 24 x 17 x 11cm and centrally located in the abdomen. The mass showed nodular internal architecture with mild heterogeneous enhancement and encased a central branching artery arising from the superior mesenteric artery. No calcification was seen and IVC and aorta were normal in course as shown in Figure 1.

He had exploratory laparotomy that revealed intrabdominal tumour with attachment to the superior mesenteric vessels and distal ileum as shown in Figure 2.  Right hemicolectomy was done as shown in Figure 3. Postoperative condition was uneventful for a period of six months. 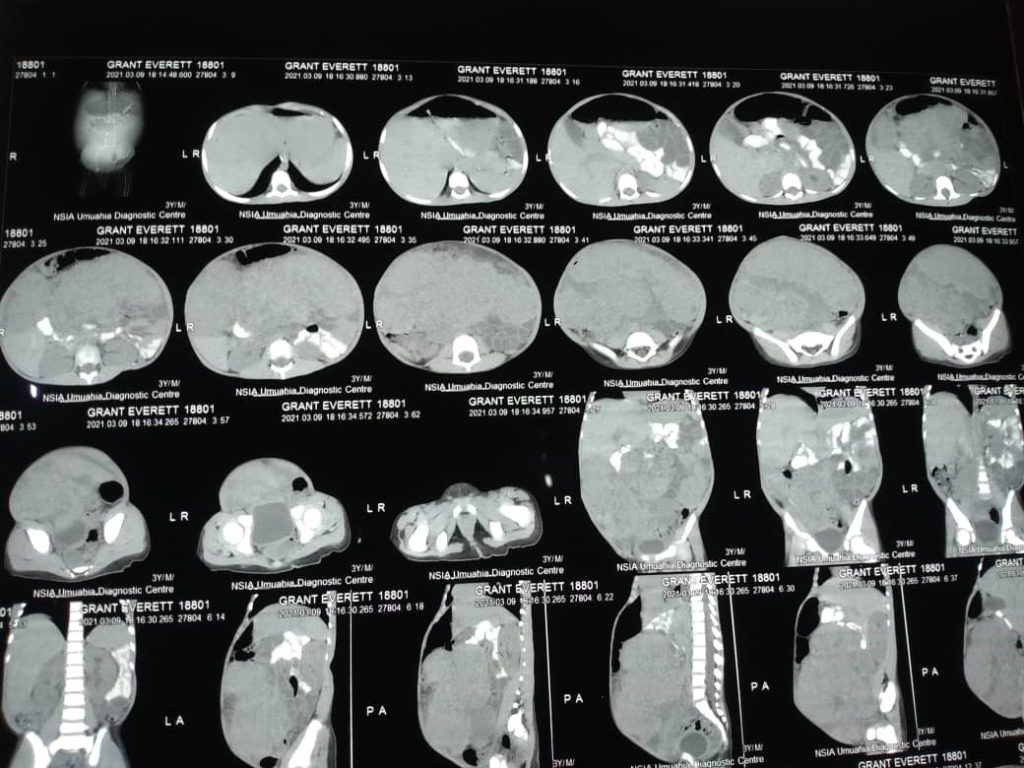 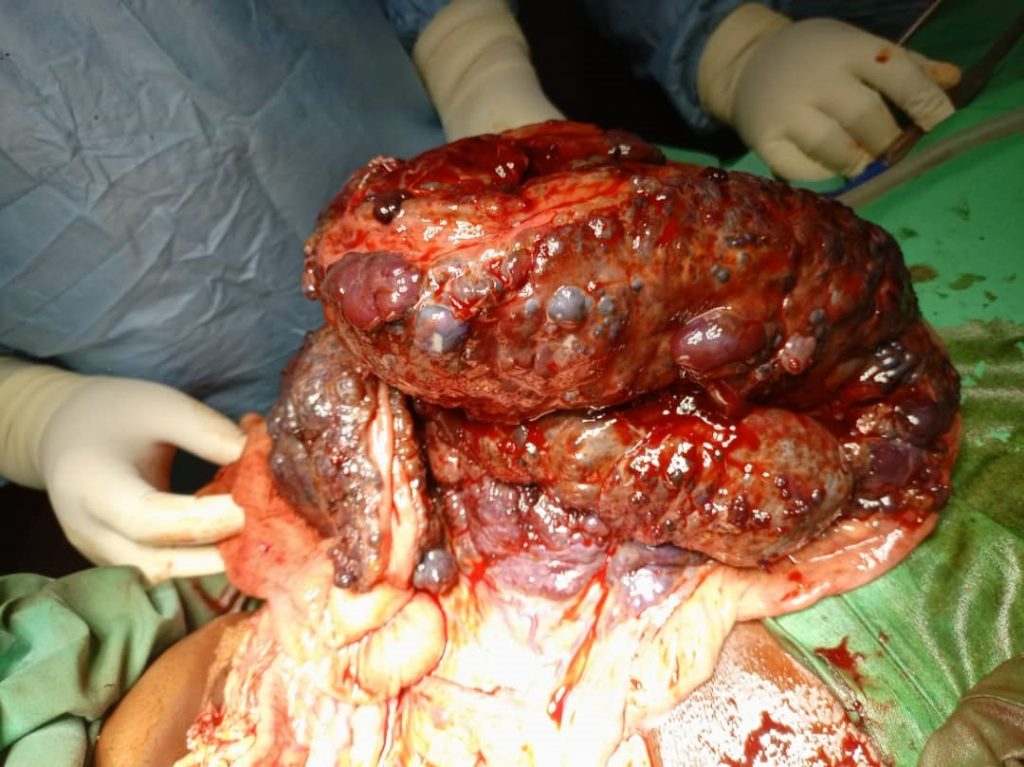 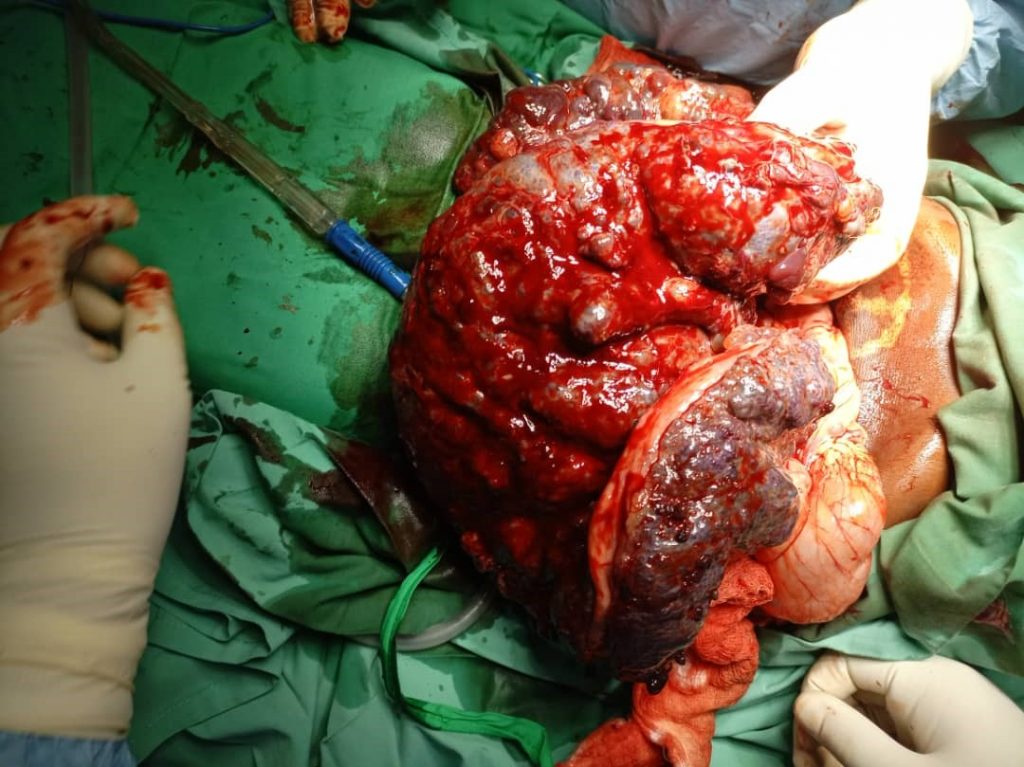 Haemangioma of the small bowel are rare benign tumours and account for approximately 5% of all gastrointestinal neoplasms.1 They can be a manifestation of Maffuci syndrome, Klippel Trenaunay syndrome, Blue runner bleb nevus syndrome and disseminated neonatal haemangioma.

They are classified histologically as capillary, cavernous and mixed types. Capillary haemangioma are solitary and induce anaemia by bleeding while cavernous induce hematemesis and melena by acute haemorrhaging.2

Treatment of gastrointestinal haemangioma ranges from supportive care to steroids and surgical resection of the haemangioma.5

Small bowel haemangioma causes life-threatening symptoms and should be considered in cases of paediatric anaemia unresponsive to medical treatment.